This year is the 11th centenary of the founding of Normandie.

In the autumn of 911 the Treaty of Sainte-Claire-sur-Epte was signed by Charles the Simple, King of France, effectively signing over a vast part of the north-east corner of France to Rrolf Gongu (“toutes les terres de l’Epte jusqu’a la mer”), a viking leader. After years of viking raids and pillaging along this coast, there came a time of peace and rebuilding by the descendants of those raiders, and the “Kingdom”(actually a duchy – self-governing, but owing allegiance to France) of Normandie was founded.

This year there are major celebrations of the 1100th anniversary. For details why not visit http://www.happybirthdaynormandie.com/

For the summer, the vikings make a welcome return to Surtainville – see our posting last summer; and there are many events within the regions listed on the website above.

31st January already, and the winter celebrations almost over. Today is the last day for wishing people a happy new year – so  “Bonne Annee; et bonne sante a tous”

A great time was had by all – including this little character

Made by one of our guests out of a slab of butter (and perhaps after a little too much to drink!), it’s supposed to be a statue of me. Now I know I’ve put on half a stone over the holiday season, but if that’s what I look like, then the New Year’s diet had better be undertaken in earnest.

We finished the evening – or morning – after celebrating both French and English New Years, with a little champagne

And so on to Epiphany and the galette des rois. Epiphany is celebrated the first Sunday after Christmas, as is also the patronal festival of Piereville – St. Genevieve – in the church. But the galette can happen anytime in January. So the 19th the hall was set for the club celebration

the galettes were brought in 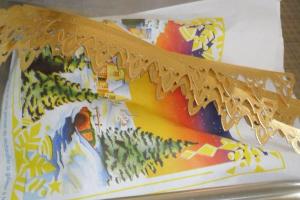 the crowns set up

and the galettes shared and enjoyed (love the taste of the frangipane!) 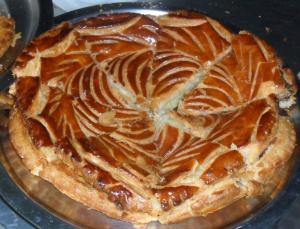 And so to Chandeleur (Candlemas) on the 2nd February. Last weekend was the Candlemas Fair at Montebourg – unfortunately we weren’t able to get there – perhaps another year. Traditional food for Chandeleur seems to be pancakes !! always thought they were for Shrove Tuesday, Mardi Gras or Carnival – but that’s something else to follow in about a month.

So Happy Candlemas, however you celebrate it, and best wishes for this year.

or was it Germany? –

If you look carefully you will see that even the signs are in German; but it was actually Mallorca! (Then again when we told French friends that we were going to Spain on holiday and they found we were going to Mallorca, they said “not Spain; the Balearics”; so not quite sure where we were!!)

And so the holiday went; a mixture of good and  not so good. The Hotel was lovely

though meal times were strictly regimented – we were told off for remaining too long (just an hour was allowed for meals) at the dinner table.  The setting of the town was beautiful; 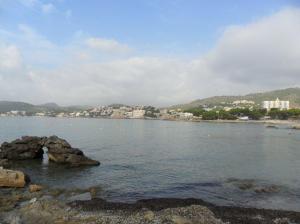 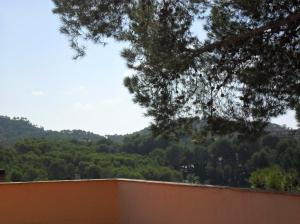 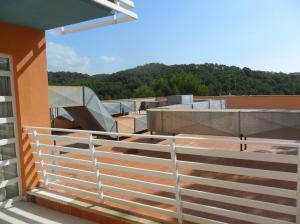 And there were some quite quirky aspects – like the fairground “Hall of Mirrors”; Can you recognise what it really was?

The first few days the weather was good – a walk on the beach and through the town in the morning. Relaxing in the sunshine with a drink by the pool in the afternoon

Then the thunderstorms arrived, and it rained 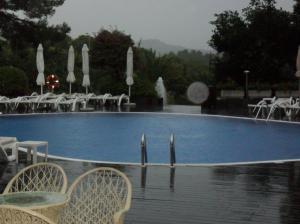 Hoping for a little better weather when we head off for Dublin shortly; though an Irish friend has given us a warning about the weather, as well as some useful advice on things to do.

A little stroll along the “Boulevard de la Bastille” at the moment, and you will see the latest photographic exhibition mounted on huge placards, and dedicated to “thrones” of the world.

From the desert of Morocco

to the arctic circle

From the Mekong Delta 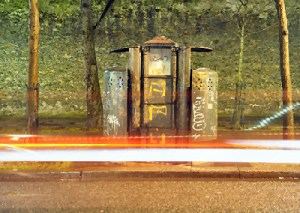 And just who is this emerging from a tin shack in the outback of Australia? and what is he doing?

And these photographs in these urinals in Iceland we are told are of the bankers who led the country into the financial meltdown! 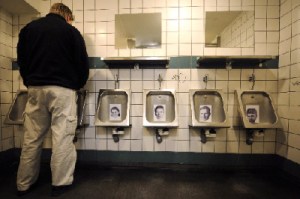 The pictures are an eloquent social commentary; but also have their serious side in reminding us of the UN statistics showing that well over half the world do not have proper sanitation.

This final speaks for itself

and well deserves the title “throne”

After the vikings last weekend – and perhaps previously – 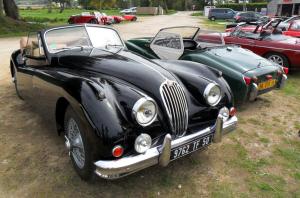 All english cars, but look again at the registration plates.

All owned locally by members of the “Roadsters Owners Club” of Normandy. Preserved in excellent condition and driven with pride – 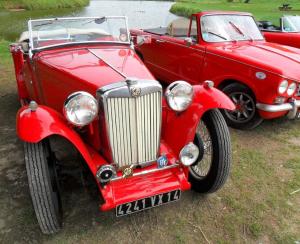 We visited with French friends, who asked if there are similar clubs in England for French cars !!  but then went on to admit that the French have never built cars like these – but we did remember the pheneomenon of the “2CV” clubs in England.

Has any nation other than England, or Italy, built cars like these? Not only stylish and sleek, but winners of races like Le Mans year on year, as many of these cars boasted – 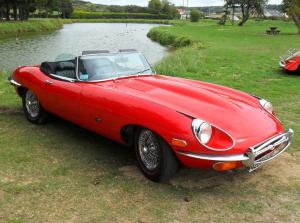 The Viking flag was hoisted over the Mare des Laguettes last weekend. Camp was set up, and the invasion began – 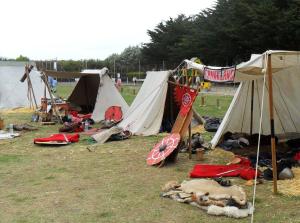 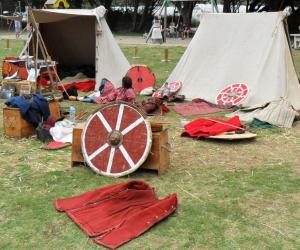 They’d brought with them their weapons –

but also their household items, as if for a long stay –

Not only that; they were accompanied by their workers in wood and bone – 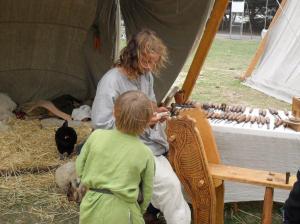 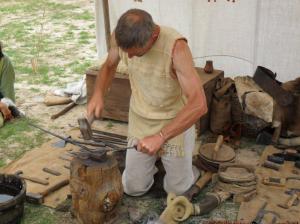 They set up home in Surtainville; but of course, it was just for the weekend. For these Vikings were members of a re-enactment society, of which a search of the web reveals many in Normandy. They brought with them traditional artefacts, games, and music, many of which are still to be found in derivative form in the region.

The Viking kingdom of Normandy was established in 911 A.D. by permission of the King of France, in order to try to curb the power of the invaders from the North, but also in recognition of their advanced state of civilization, under Rollon (Hrolf Gongu). 100 years later it had become a Dukedom within France, but was to blossom again under William, Duke of Normandy who in 1066 established the Kingdom of Britain and Normandy.

Many Normans revel in their Viking origins, and for the 1100th anniversary of the Kingdom of Normandie are planning on linking with countries of Viking origin throughout the world, and organising events and spectacles in celebration.

and the links to Viking and Norman heritage given there. ( www.Normandie-heritage.com is one example)

No need to travel far to celebrate Midsummer’s day and the start of the holiday season here in France. Every major town and city, and many, many smaller towns, villages and communes celebrate the summer with the Fete de la Musique. From the spectacular celebrations of Paris, Toulouse, Marseille, Bordeaux and the like; to Caen, to Cherbourg and other smaller cities; it will be a night of celebration of all kinds of music – medieval, folk, classical, pop, rock, indie, techno; you name it, it will be there somewhere.

Not to be outdone, smaller towns and villages started the celebrations early. Last Friday saw the choice of three local villages – Surtainville, Le Rozel and Benoistville. As I was singing with “Dynamique” of Pierreville it was to Benoistville that I went.

The village centre was packed by 2030hrs 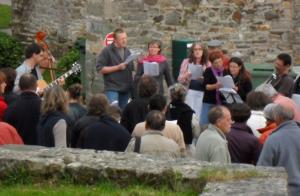 One highlight of evening was “La Chanson de Rue” – a mass sing-in of “Les Copains D’Abord” by the assembled visitors led by most of the musicians and the choir “les Marins de Cotentin”. 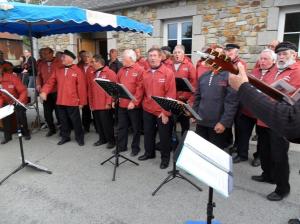 For me, a real find  was the group Ars Nova performing medieval songs accompanied by medieval instruments in the church. If you’re interested you can find out more on their website – www.arsnova-consort.com

I missed the “Danse Country” at Surtainville on Friday, but managed to catch some of it on Sunday in Les Pieux; part of their Fete de la Musique – not that I’m enamoured of American line dancing, but it does seem to go down well over here. No the reason I wanted to go to Les Pieux was that Mask Ha Gazh were once again playing outside the Hotel Les Pieux

– always a pleasure to watch, and join in with the singing (and dancing – you can’t keep still to their brand of “Rock Celtique”). Their website – www.maskhagazh.com 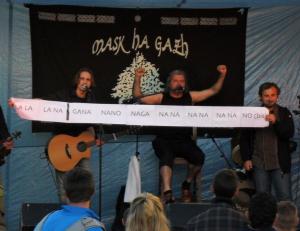 And yet another “find” for me. Playing beside the Mairie was the (locally based) Folk group Eridan 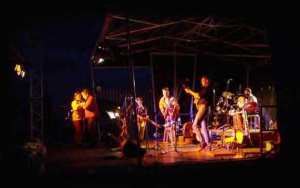 Once again you can find out more, and listen to their music on their website – www.eridan.folk.free.fr

So the season begins – after a long time without blogging  I hope to get organised and bring you up to date on events in the area for the summer season; and just to tantalise a bit  – ‘what are the Vikings doing in Surtainville this August?’

Best wishes for a great season