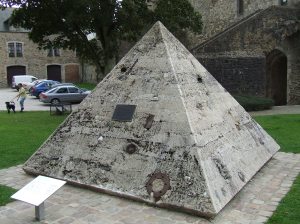 Have you seen it yet?

Created for the millenium, this pyramid in the grounds of the chateau at Briquebec tells the story of the 20th Century through the artefacts that are gradually revealed from within it.

The Pyramid was made using sand from the landing beaches, and contains artefacts from the 20th century. It is designed to erode with the weather and gradually reveal more of the history of the century. (The Mairie at Briquebec asks for all artefacts to be returned through them).

So far we have seen parts from rifles and other munitions, bits of bicycles, parts of motorcycles, amongst other things. A fascinating way to tell the story of the last century before the new millenium, that still continues. Have you seen it yet? What do you think?

One response to “The Millenium Pyramid at Briquebec”